I got my first horse when I was 15 – a loaner.  He belonged to Frank, a wheat farmer near Scott City, Kansas; a friend of the family.  His son, Ray-Lee, worked for my dad.  We’d go pheasant hunting each fall on Frank’s place and when he found out I wanted a horse he loaned me Sonny; a big gelding Frank said was three-quarters Quarter Horse and a quarter Morgan.  Frank said “If you like him, buy him.  If you don’t just bring him back.”  We took him back a year later.

Sonny was what cowboys call a “knothead.”  There are a lot of spoiled horses in the world and most of them are due to inexperienced or uneducated riders.  I’d ridden stable horses a few times, but nothing like Sonny.

He had about every bad habit a horse could have but the worst one was “raring up.”  At first I liked it because I remembered when Roy Roger’s horse Trigger stood on his hind legs in the western movies I’d grown up with.  It was cool looking.  It wasn’t so cool when Sonny almost fell over backwards and Dad said you’ve got to make him stop doing that. “Sure dad… but how?”

That’s when I got my first horse training lesson from a man who was inducted into the Rodeo Cowboy Hall of Fame in 2014 at the age of 78.  You can read about it here – Bud Sankey.

I described Sonny’s habit and asked Bud what I could do to get him to stop.  Bud said, “That’s easy.  Get yerself a short two by four and the next time he does it knock him in the head.”

I only had to do it twice.

I’ve had lots of horses since Sonny, and I’ll probably tell you about a few of them in future posts, but I’ve got a different story I want to tell you now.  A story about a mule.  So, let’s fast forward from age 15 to 48.

My third wife, Kayce, and I were living on 57 acres near Ault, Colorado.  Mom and Dad had moved their helmet factory from Calgary Alberta to Fort Collins, Colorado, about four years earlier.  I had been living in Dallas producing a regional bridal magazine, which had failed to make any more, so I’d shut it down; it would be fall before I put my annual fall home show together in Wichita.  With nothing on my agenda, I spent the summer helping them train their new employees.  That was when I met Kayce, at a country nightclub called the Sundance. (details on all the above in future entries)

We dated, married in the fall, and after living in Nashville for a year we moved back to Colorado where I created a spring home show in Fort Collins.

Kayce was the beautiful daughter of a Montana rancher.  Her dad, Max, had quit ranching and moved to Colorado years earlier.  He and his wife Lois had about 40 acres, and we had bought the place next to them.  I remodeled the house, built an arena, a round training pen, and stables, where we kept a few horses and a couple of small mules.

I’d bought the mules from a trader down by Parker, Colorado.  Max had ribbed me about the deal because neither mule knew much.  But I’d only paid $300 each for them and I figured I could train them to ride and pack.  The john I named Homer, and the molly Joline, after my dad and my brother Joe.

Homer became one of the best I ever owned.  Josephine was a little on the mean side.  You could ride her, if she was in the mood, but she packed well. We had some incredibly good times packing our camping gear into the Rawah Wilderness.  I acted as outfitter for friends and family and sometimes we’d be in the mountains for a week at a time. There may be places on Earth as pretty, but nowhere is any more beautiful.

There’s a snapshot in my mind of the full moon rising over a high meadow between two rises looking down on a small pine bearded lake.  It’s an image I’ll never forget.  My youngest son Zach knows where it is and, what’s more, he knows that’s where half of my ashes are to be spread.  The other half are promised to Paco in Mexico.  They’ll be dumped at the base of a ficus tree in front of his parents house.  It’s where we’ve drank many a “quartito” of beer together.

In the fall of ’96 Dad and Joe put together an elk hunting trip to Wyoming.  Dad’s insurance agent was from Saratoga and declared that the best elk hunting anywhere was below Kennedy Peak.  I was invited to bring along my horse and mules to haul out the elk, if anyone got lucky. 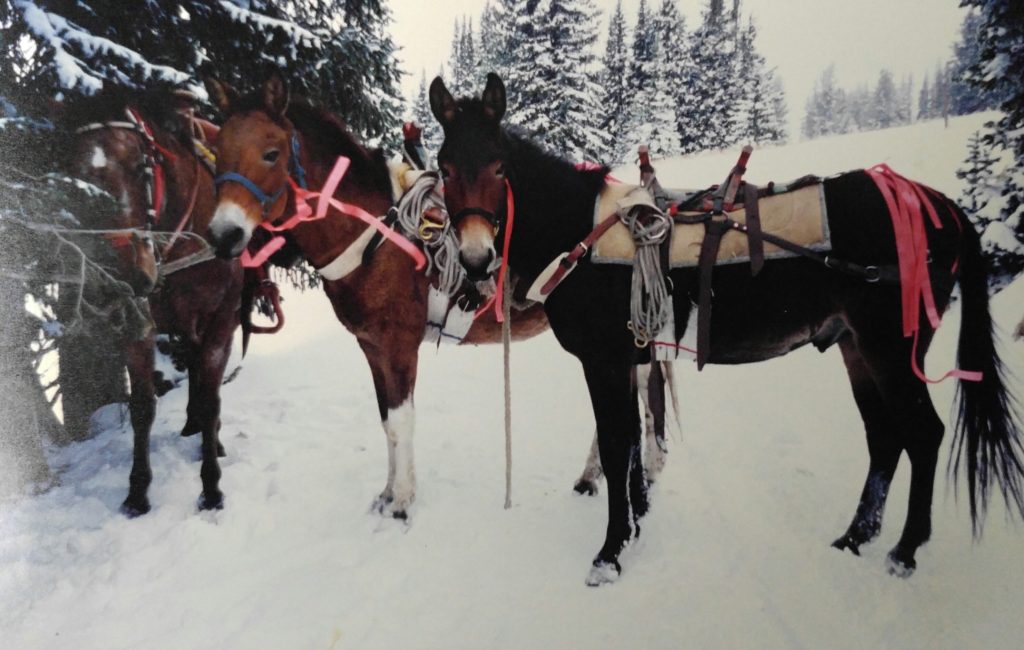 While we were setting up our camp, in freshly fallen snow, a couple of other hunters introduced themselves.  They were fire fighters from Wisconsin, camping nearby, and pretty pumped up about the elk they’d killed a couple of days earlier.  They told us that hauling out the meat had been a pretty tough job that had taken them two days.  The side of the mountain was steep and it was a hard slog in knee deep snow.

The elk hunting was good, and by the second day brother Joe had killed his elk. About the same time, in the same general area, one of the fire fighters had downed one too.  I was saddling up when the firemen told me about their elk.  I said, “Wait til I get my brother’s elk out and I’ll go and get yours too.”

They offered to pay me for my trouble but I told them “No, but thanks.  That’s what I came up here for.  I didn’t come to hunt.”

It took a couple of hours to haul Joe’s elk out. When we’d unloaded the mules I rode back up the road that wound it’s way to the top of the peak and met the fire fighters about half way up.  Their was only one road and they’d told me about how far they’d be.

The elk was laying about a half mile below the road from where we were but above where the road ran further down.  I suggested the easiest way to go about it was for one of them to go with me and show me the way while the other drove down below to wait for his buddy.  It would save him a hard hike back up the mountain.

With that agreed we started down toward the elk.  I don’t remember the guy’s name but I’ve got a picture of him here, sitting on Homer’s back. (Maybe the NSA can use their facial recognition software and find him for us.) 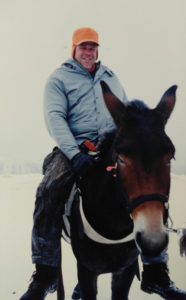 He started walking and I said, “You don’t have to walk.  Jump on that little black mule. He’ll let you ride.”

As we were moving slowly through the pines and the snow Homer’s passenger said something about me being a cowboy.  I don’t remember what it was he said, but I replied, “Don’t tell my wife I’m a cowboy, cuz she’d disagree with you.”

“Well, she’s a rancher’s daughter and to her way of thinkin’ I am not a cowboy.”

“Well,” he exclaimed, “In Milwaukee you’d damn sure be a cowboy!”

I sold Homer that next summer, by accident.  By that I mean I didn’t go to do it.

A man had come down from near Laramie to look at a two-horse trailer we had for sale.  He bought it and as he was walking past the corral he asked “What would you take for that mule?”

To prove my point I climbed over the pipe fence and threw a leg over Homer’s back and rode him around the corral, showing the guy just how gentle a little mule he was.

Persisting the guy said, “Everything’s for sale.  Come on… how much would you take?”

“I wouldn’t take less than a thousand for him,” I replied.  Confident that I’d priced him way out of the market.

I felt like crying as he pulled out of the drive with his new trailer… and his new mule. 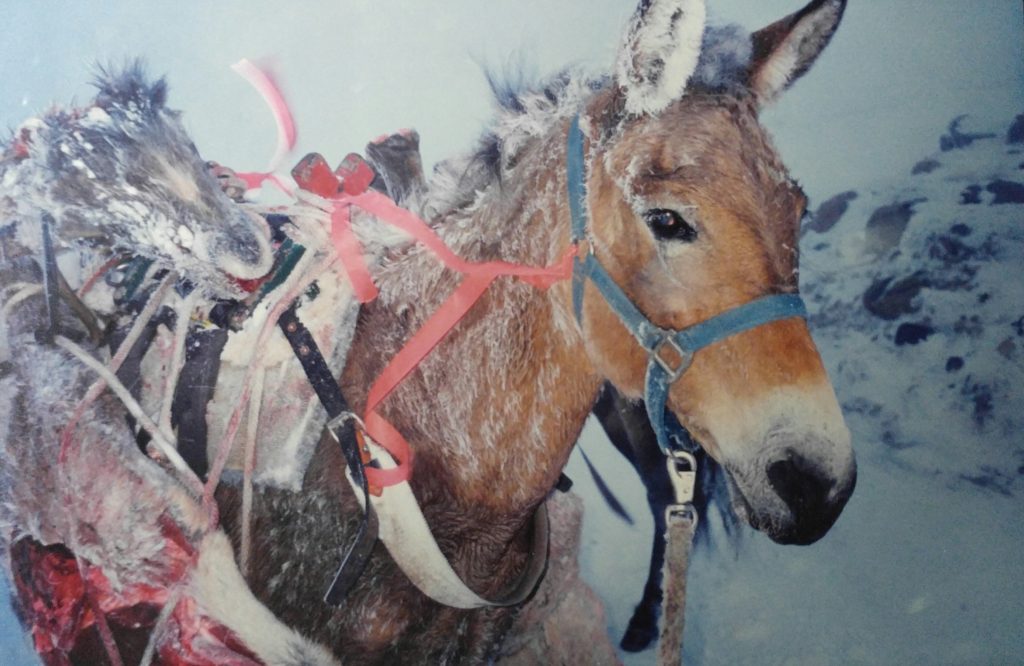 This entry was posted in Biographical. Bookmark the permalink.

This site uses Akismet to reduce spam. Learn how your comment data is processed.